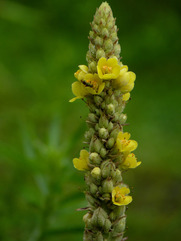 Mullein Infusion
Make a quart of mullein infusion, using one ounce (30 grams) by weight of dried mullein leaf or leaf and stalk, in a quart of boiling water, steeped for 4-10 hours, off the heat and tightly covered. Strain, using a cloth-lined metal strainer. Retain and refrigerate the liquid, the infusion.

Spiced Milk
Make a quart of spiced milk by gently warming one quart organic milk with 1 cinnamon stick, 6 cloves, a little mace or nutmeg, and a vanilla bean or a slice of ginger. Optionally, use a teaspoon powdered cinnamon, half a teaspoon of powdered ginger, a dash of powdered cloves, and a dash of nutmeg. Let cool, then refrigerate without straining. Leave spices in the milk.

Mullein Chai
Combine, heat, add honey to taste, and enjoy. Or, combine, sweeten if you wish, pour over ice and enjoy. If you want just one cup of mullein chai, combine half a cup of each liquid. If you want to share with friends, combine several cups of each.